Howdy everyone… As a prize for winning the Halloween costume contest a bunch of us got the opportunity to snowmobile to Cape Evans. This is where Robert Falcon Scott’s Terra Nova hut was built for his failed expedition to be the first to the South Pole. The hut was completed in 1911 and was also used by Shackleton during his failed attempt to be the first to traverse across Antarctica. The history and stories of this hut are truly amazing. The courage, and strength of the men that stayed here is like no other on earth. They had to endure unbelievable hardships. To learn more about some of these men I suggest that you read the book “Shackleton’s Forgotten Men”. Just stepping foot in this hut you could feel the history and stories seep into you. The hut is preserved and maintained by the Antarctic Heritage Trust. They try to ensure that the artifacts are in the places that they were found. To walk around inside is like going back in time. There is no glass to separate you from the artifacts, just time itself. I feel so very lucky to experience it first hand and have really enjoyed reading books about these determined and hearty souls. Because this place has so much history, and I took over 250 pictures, I will post several entries dedicated to it. Enjoy the pictures and descriptions. Please know that I would love to tell you all more about this place in person (along with many pictures) when I get back to the states.

The Barne glacier. This glacier flows down from Mt. Erebus and into the frozen Ross Sea. The size of things in Antarctica can be deceiving… the flanks of this glacier are several hundred feet straight up. It’s a very dangerous place as you never know when the massive chunks of the glacier will calve off. Some of the broken pieces are larger than several houses.

R.F. Scott’s Terra Nova hut at Cape Evans, Antarctica. This hut was built for Scott’s failed expedition to be the first to the South Pole. He made it to the pole, but was beat there by Amundsen. Scott and his men died on their return from the pole. Behind the hut is a flank of the active volcano Mt. Erebus.

Hundreds of dead starfish outside Scott’s Terra Nova hut at Cape Evans, Antarctica. The starfish appeared earlier this season and nobody knows why. It’s been a big mystery down here. My guess is that there was a very high tide during the “supermoon” and the starfish flowed through the tidal cracks in the ice and became stranded along the shore. 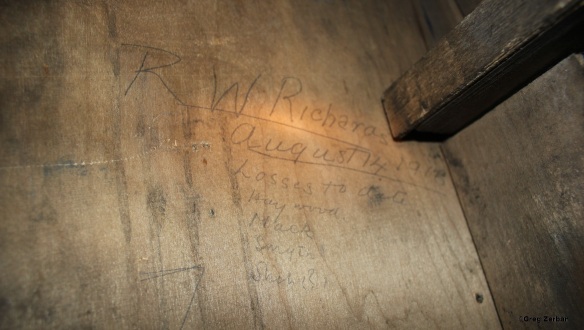 R.W. Richards writings on the wall of his bunk in Scott’s Cape Evans Hut. He was a member of Shackleton’s unsuccessful Trans Antarctic Expedition when Shackleton attempted to be the first to traverse across the continent. Richards was keeping track of the men who died. He was part of the expedition that setup food depots on the second half of the continent for over two years, not knowing that Shackleton would never even start the traverse. The story is even more amazing than Shackleton’s Endurance story. I highly recommend reading the book “Shackleton’s Forgotten Men” Two of the men listed in the picture were Haywood, and Macintosh, who both died trying to get back to Cape Evans from Hut Point. They were stranded at Hut Point in the Discovery Hut and were waiting for the sea ice to be safe enough to cross. They didn’t listen to their comrades and decided to have a go at it. They ended up on unsafe ice that flowed out to sea and were never seen again.

RW Richards bunk at Cape Evans, Antarctica. His writings were on the boards just left of his pillows.

Here are some pictures of icebergs stuck in Ross Sea ice. They were truly amazing to see and much more impressive than the pictures show. Only about 10% of the iceberg is visible so the other 90% is underwater. These icebergs were likely grounded deep underwater and then frozen in the annual Ross Sea Ice.

The last picture is of R. F. Scott’s hut at Cape Evans, Antarctica. This was built as his home base during his South Pole Expedition over 100 years ago. He and his men died on their return from the pole. They nearly made it to a food depot stashed in the ice. 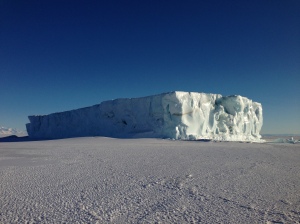 A large iceberg stuck in the Ross Sea Ice.

A very large iceberg stuck in the Ross Sea Ice. A Hagglund is in the distance.

Me in front of the iceberg. 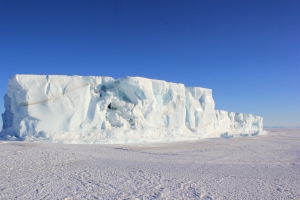 This massive iceberg is stuck in the Ross Sea Ice. It is sticking out of the ice about 50 feet and the other 90% of it is under the sea ice!! That is an ice cave about half way up the face of it.

Another shot of the large iceberg. 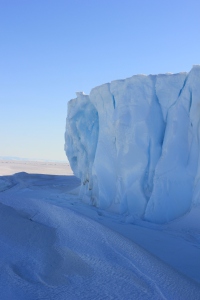 Iceberg stuck in the Ross Sea Ice. A pressure ridge crack around the whole thing makes the perimeter very dangerous. 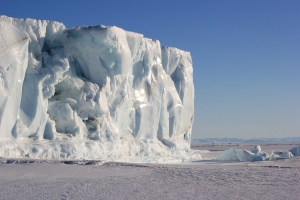 Beautiful iceberg in the Ross Sea Ice. The part showing above the surface is only about 10% of it’s actual size. That would mean that the part we can’t see is over 500 feet down under the ice!

The Trans-Antarctic Mountains behind a giant iceberg. The mountains are also known as the Royal Society range.

Looking down a sea ice crack 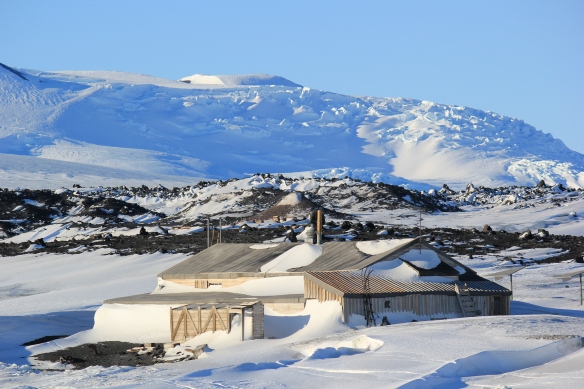 Scott’s Hut at Cape Evans, Antarctica. This was R.F. Scott’s base during his South Pole expedition over 100 years ago. It’s amazing to think that it exists exactly as they left it.